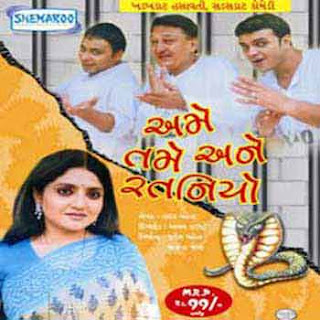 Synopsis: Story moves around three prisoners who escape form jail and arrive at home of Mr. Gandhi. Mr. Gandhi is running a store on rental basis which is owned by Daskaka. Gandhi family gets emotionally attached with these prisoners. These three prisoners help Mr. Gandhi and his family in different ways. On the next day they found dead body of Daskaka. Does Daskaka has committed suicide or he is killed by someone? If he is killed by someone then who is the killer? For that watch the Play Ame Tame Ane Rataniyo.