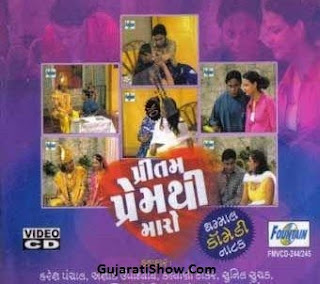 Summary: A riotous adult comedy, which will send you in peals of laughter.

Young and desperate bachelor, Ashish dreams of being in a relationship with Bollywood celebrities. Having failed at wooing girls, Ashish fears he would die a bachelor. One day, Kamdev (Hindu God of love) appears before him and grants him a boon: he will marry the girl he desires. However, there is a catch: if he woos a girl by unethical means, he will never find happiness in his life. Kamdev's words come true when Ashish meets Ekta. Love blossoms and soon they get married. However, his happiness is short-lived as Ashish is unable to consummate his marriage. The reason; he had misled Ekta into marrying him. In addition, as prophecy by Kamdev, happiness eludes Ashish. Will Ashish realize his mistake? Will he be able to find happiness in life? For answers, watch the comedy play Preetam Premthi Maro.