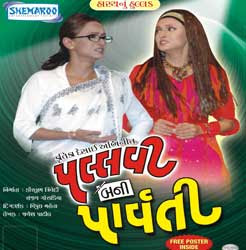 Pallavi is distanced from her family because she works in a dance bar. Pallavi dearly loves her sister Shilpa. She is extremely upset when she is not called for her sister’s engagement to Bhavnagar. The play takes a bizarre turn when Shilpa informs Pallavi about her broken engagement. The engagement has been cancelled because Shilpa’s in-laws get to know of Pallavi’s profession.

Pallavi is unhappy with the way things have turned out. To add to her misery, Pallavi also witnesses a murder that stresses her out. That is when police inspector Shirodkar decides to hide Pallavi from the killer. He decides to send her as an undercover maidservant to work for the Mehta Family. The Mehta family is not very popular. The members are biased and prejudiced. Thus Pallavi transforms into a widow called Parvati. In the Mehta household she learns that Mr. Mehta and his two sons are not bad at all.

It is the mother, Hansa Mehta who rules the house and dominates everyone. Hansa is a fanatic woman who makes everyone’s life a living hell. Pallavi cannot cope in the Mehta household. Moreover, she is tired of Hansa Mehta and decides to run away. At that time, she learns that Hansa is the woman responsible for her sister’s broken engagement. And it is her son Ashish who is in love with Shilpa. Pallavi then decides to stay back in order to set her sister’s home. But things turn difficult for Pallavi as she faces obstacles at every stage.