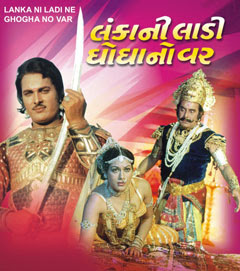 Synopsis: 'Lankani Ladi Ne Ghoghano Var' is a story about Lankapati Raja Ravan, who has been blessed with power by Lord Bholenath. This power has made Lankapti Raja Ravan arrogant and after watching this Lord Bholenath sends Rishi Muni to make him alert about his arrogance. Rishi Muni teaches him a lesson, by saying that he has everything to be happy in life, but there is one thing that he is not lucky about i.e. 'Kanyadaan'. Listening to this Raja Ravan prays to Lord Bholenath of having a girl child and he blesses him with a girl child. Raja Ravan's pride has augmented now after the birth of his girl child named Tara and asks Maa Vidhatri about his daughter's fate, but after watching his pride Maa Vidhatri curses Raja Ravan that his daughter will marry a 'Shudra Putra'.

During the feast, where Raja Ravan treats all the Brahmins he finds a Shudra Putra, Bhima sitting among the Brahmins and gets livid and asks the senapati's to kill him. But Bhima is saved and is destined to live as Kumar Bhima, son of Maharaj Vijay Singh. Tara requests her father to let her go for a Yatra and there she has been attacked by the dacoits, this is when Kumar Bhima reaches to save her. But Tara and Kumar Bhima are seized by the dacoits. According to the dacoits rituals they get the two married before killing them. Is the curse given to Raja Ravan come true? Will Raja Ravan agree to this marriage?