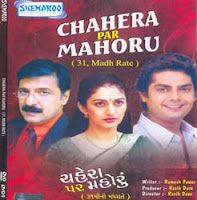 An international film festival in Goa, with directors and producers from around the world in attendance. Among them is Amar Shandilya, along with his second wife and son Neeraj. Neeraj does not like to be known only as his father's son. He has identity of his own. When Mallika, a famous model and Amar's fan is found murdered an intense cat and mouse game with the police has begun. Neeraj is the main suspect. He had met Mallika. He had spoken to her. But an unknown person seems to have photographed Neeraj with Mallika and also his alleged attempt to hide the body. And he is blackmailing Neeraj. With so many people around Neeraj cannot find the face behind the mask. Can he call the blackmailer's bluff? Will the police catch up with him?