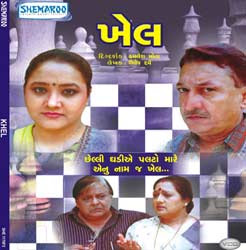 Kundan, a one time brilliant actor fallen on hard times. Alone, without his wife, his life seems to be one long descent into hell. He had only memories to look back on, nothing to look forward to. Then came a chance to regain what he had lost. But to do that, he had to set into motion, a dastardly game. Only he knows the rules and moves of this game. A game, that makes Amrut Jhaveri, his wife and daughter the prey. A deadly, sinister, game.

Buy DVD of Khel (India Only):