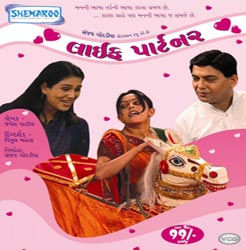 Vishnu Pitamber Shastri (Hemant Jha) is well known astrologer leaving with his wife Jasumati (Manisha Mehta) in baroda . He has stopped predicting the prophecies .one day , his childhood friend Labhu comes. Labhu (Rajesh Soni) is going to pilgrimage and is worried about his daughter sonaki (Ami Trivedi), who is physically grown up but mentally remained a child. Vishnu assures labhu that he will take care of sonki. Jasumati forces Vishnu to have alook at sonki’s kundali and Vishnu predicts that soon there is going to be a massive change in sonki’s life. That’s when vishnu’s son , Rohan (Dharmesh Vyas) returns from UK with his girlfriend, Priya (Dimple Shah). Rohan is in love with priya and they are planning to get married soon. But Vishnu warns priya not to marry rohan , because , Vishnu predicts that rohan’s first wife will die while delivering their child. rohan is taken aback and refuse to bow before the prediction.. but even he knows that vishnushas

What happens to sonki in the hospital ? What is the end of love between Rohan and Priya ? Vishnu Shahstri's prediction proved true ?