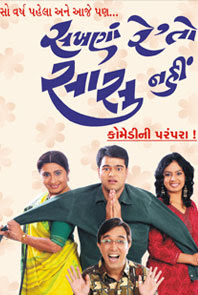 Sakhna Re To Sasu Nahi

Synopsis: Sakhna Re To Sasu Nahin Each generation builds road for another one. And each feels the next cannot or doesn't wish to understand the present. "Sakhna Re Sasu Nahin" is a story of all mothers who are possessive about their kids. Kunjbala is one such mother whose love turns almost into obsession post marriage of her son Pratik with Varsha. It's natural that Pratik's span of attention is divided as he tries his best to strike balance with his spouse and mother. Varsha is overwhelmed by the affection of the Mother in Law. But craves for her own space as Kunjbala's love, without realizing its implications wishes to be part of the couple's day to day living in every step of life. Pratik is torn between two women whom he loves most. Pratik's efforts in finding solace with Bhadrakant mama falls flat as "the funny mama" adds fuel to fire. Well it doesn't end here; the story interweaves drama, relationships with fanastic twists and turns in laugh riot situations of "Sakhna Re Sasu Nahin"