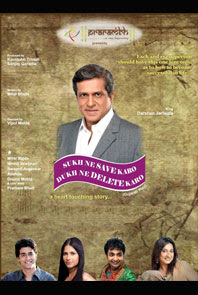 Synopsis: This play is enacted by Darshan Jariwala who is a renowned Gujarati film, television and stage actor. He has won the National Award for Best Supporting Actor in the movie Gandhi, My Father. This play, `Sukh ne` revolves around the lives of Amrutlal Sandesara and his children. Amrutlal is a strict disciplinarian And enforces the same among his children and guides them to follow it to be successful in life. He wants all his children to become successful in life. But though he tries his best, luck has something else in store for him. As ill fate would have it, one by one all of his children move away from him. Will he be able to get all of them back home. You are bound to get engrossed in the play as it reflects reality of life on stage. Other than Darshan`s superb performance, the other highlight of this play is the creative stage set which showcases 4 different designs and is specially brought in all the way from Mumbai. This is a beautiful social comedy play specially to be watched by parents and teenage children together. Often parents enforce strict vigil and discipline on children so that the children could become better human beings and also become successful in their lives. But sometimes it so happens that parents do not get connected with the ideals of the youth and it leads to disastrous results. This one especially goes out to all the youngsters, so please do come along. You will surely want to `Save` this one rather than press that `Delete` button. Also, a good lesson for parents too.