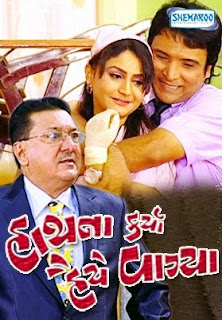 Synopsis:
Haath Na Karya Haiyye Vagya is a wonderful play with a gripping plot. Jay and Priyanka plan to marry each other after purchasing their dream home. To achieve their dream Priyanka takes up the job of a nurse to the middle aged, Mr Diwan. Jay and Priyanka are duped by the builder and they lose all their saved money. Jay devises a wicked plan in which he make Priyanka marry Mr. Diwan who they find out has only four of months to live due to some terminal illness. But their wicked plan backfires when they come to know that it is not Mr Diwan but her mother that has only 4 months to live. Mr. Diwan is then mysteriously murdered. Both Jay and Priyanka own up as the murderer. The police start their invstigation. Will they find the real culprit?