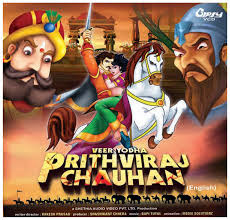 Enjoy this wonderful animated biopic that narrates the tales of romance and chivalry of Prithviraj Chauhan. Prithiv was the king of the Chauhan dynasty, who ruled the kingdoms of Ajmer and Delhi in northern India during the latter half of the 12th century. Watch the adventures of the young Prithvi as he single handedly slays a lion. See how Prithviraj Chauhan elopes with his lover Samyukta and fights the invading Muhammad Ghori in an epic confrontation.