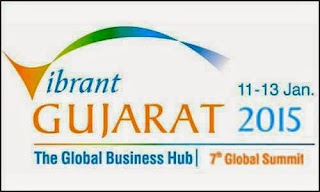 The 7th Vibrant Gujarat Summit happened during 11th-13th January 2015 at Mahatma Mandir, Gandhinagar, Gujarat. It was organized by the Government of Gujarat and was even more successful than other 6 editions. The sixth edition of the summit provided huge prospects and opportunities to the state the display its pros, progressive attitude, investor friendly atmosphere and initiatives for the sustainable development.

The prime focus of the summit this year was inclusive development and creating a platform for innovation, viability, skill development in various sectors, knowledge sharing, networking, and exposure of the art and heritage of Gujarat to various visiting faculties and delegates from around the globe. In addition to this, the summit provided an attractive platform to its participants to interact with industry leaders and renowned personalities of various fields from around the world.

The number of participants was over 2000 and attracted over 3000 international delegates with international representation from over 100 countries which attracted a little more than 2.2 million people becoming the India’s biggest exhibition. The Prime minister of India was the main attraction; also various business tycoons from around the world took part in the trade show at the summit. John Kerry, the United States secretary of the state was also present at the international investment conference.

The event couldn’t have been better. The next summit is expected to happen in Jan 2016 and would be even bigger, let’s hope for the best!