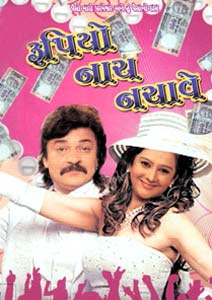 Dharmjha is living very simple life with her two son Viral and Dhawal. & on the Other side Big Businessman of Dimond Market Rajesh Sheth’s has two Daughter Shalu & Ekta who are living very high/modern lifestyle. Viral & Shalu get married. Viral goes against his mother and now he is leaving in Shalu’s house. Just to realize them money is not important and Take revenge from Shalu’s family Dhawal start to stay with them. How people can dance for money in different ways for that watch money based comedy Rupiyo Nach Nachave.