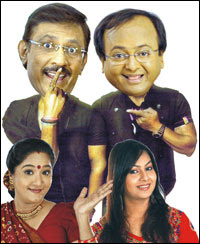 
Synopsis:
Three couples want to have some private time in a flat, each expecting the other couple to vacate the flat. The fourth couple, who own the flat, get dragged into this frenzy. The man is a producer of television serials. But his television channel owner is a woman of strict Victorian values. The owner arrives suddenly to test the moral values of the fourth couple before assigning them a huge project. The couple who own the flat go all out to prove that nothing is wrong where almost everything goes wrong with the other three couples wanting to have a merry time.