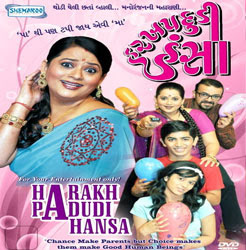 Hansa, the overjoyed, over animated, crazy mother, a complete T.V buff and it was her dream to become an actress but circumstances proved unfavorable. She is now set to relive her dream through her daughter, Nirali. Nirali is a born actress! Hansa flaunts Nirali's talent to whomever she meets. Nirali's father Kuber Bhesania is busy making money to give good life and education to his kids. Hansa knows the apprehension of Kuber and without his knowledge takes Nirali for an audition. She even plays bluff to her school for a day off. Hansa doesn't even care about what impact it will have on her kids. Nirali within a short span of time becomes very popular, and her life undergoes a drastic change. It starts with her surname being changed from 'Bhesania' to ever so filmy 'Chopra'. Hansa's need for recognition, for filling unfulfilled dreams turns Nirali from a lovable kid to her prized possession, her showpiece. For extreme success, there is an extreme price to pay..See the play to know what is happening next.