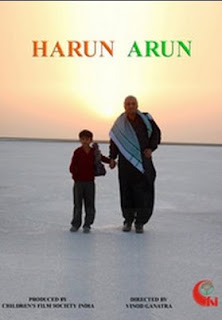 1947 partition of India divided not only a country but many hearts and families too. One such man separated from his motherland leaving his house, farm to his married daughter, was Rashid Suleman who is living in Pakistan with his only surviving family member, his grandson Harun. Rashid had long harboured hopes of going back to his birth place Lakhpat in India and meet his childhood friend Jesang Mavji who looks after his farm & house after the death of his daughter. His grandson, Harun had been hearing about his family roots in India and wanted to visit Lakhpat too.

Under changed circumstances, an old man now, decides to cross the border into India to hand over his grandson Harun to his childhood friend Jesang Mavji in Lakhpat,India.

For more story watch this Film. HARUN -- ARUN is the first Gujarati Family Film of its kind fully shot at Kutchh and with Dolby sound.