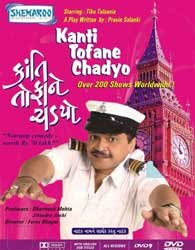 Tiku Talsania, Reshma Desai, Falguni Dave, Rajesh Mandloi, Sanjay Hiralehar Here comes one more comedy that has thespian Tiku Talsania dip into his bag of time-tested histrionics. The last one that he did in the same genre was NE BACCHU BACHI GAYO. The plot is simple. It draws on the relationship between a father and his son. It is evident in the Indian scheme of things that a father will do whatever he can for his son. Such an opportunity does present itself to Kantilal (Tiku Talsania) who is the father in the play. Kantilal is a very honest and upright Customs’ Officer who has a wife called Sakshi (Reshma Desai) and a son called Pintu (Harshil). One day, Kantilal and his wife discover that their son, Pintu suffers from a serious heart anomaly. The couple now has two choices before them. Either they leave the fate of their son in the hands of God or they manage to acquire Rs. 70 lakhs that are needed for the heart surgery. This incident sets the tone for Kanti’s tofani antics! The rest is for you to guess or to see. The producers of the play insist that you will not be disappointed because the play boasts of a combination in the form of the writer, director and actor who have carved a niche for themselves on the Gujarati stage. Gujarati, Natak, comedy, funny drama