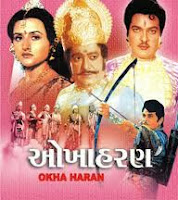 Okha Haran is a devotional Gujarati Movie featuring Mahesh Pandya, Srikant Soni and many more. Though the history of chandravansh after the war of Mahabharat is not much known (at least by laymans), a grandson Of Lord krishna named Aniruddha (son of Pradyumna), has been kidnapped to Miser (Egypt) by Chitralekha for her best friend Okha (or Usha) who was a princess and daughter of Banasura and fascinated from Aniruddha (this tale is popular as OKHA-HARAN and people used to read it once at least during CHAITRA mas.