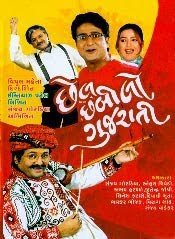 Summary:
This Gujarati play is an adaptation of P. L. Deshpande's Marathi classic play, TUZ AAHE TUZ PASHI. It is a satire, subtly told on many levels through the protagonist Kaka Bapu and the antagonist Acharya Aatmarambapu. The play tells us of the values dear to both, Kakaji and Acharyaji, and of how in the stream of their thoughts other characters get thrown in, are tossed about and finally resolve their struggles.

Usha, swayed by the `simple living, high thinking' philosophy of the Acharyaji, invites him and his adopted daughter Geeta to her house to conduct a camp. While her easy-going Kakabaapu and her fun-loving brother Shyam are resigned to Usha's attitude, they prepare to welcome Acharyaji. Geeta, brought up in the stern discipline and austerity of the ashram contemplates on her life which she realises is no different from a game of chess.

Soon Usha begins to realize that she has spent her energy in a cause she doesn't really believe in. Meanwhile her brother comes under the influence of Acharyaji, because of his attraction for Geeta. The play in essence talks about human-pawns who revolt under complex circumstances and who eventually learn to take independent decisions.