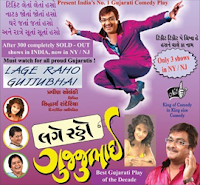 All men have a dream, and all married men have a Dream Girl ! The plot of the play revolves around a simpleton, middle-class man called Jagdish. He is married for well over twenty-five years and has a son who is enamoured by a TV actress, called Chandni. A TV channel announces a game show that offers the winner, a visit to Malaysia with Chandni.

Jagdish readily applies and answers the questions over the phone. He wins! When he meets Chandni, he impresses her by saying all kinds of lies and tells her that he is still a bachelor, living with his old parents. Chandni tells Jagdish that that she would love to get an experience of staying in a middle- class joint family and would therefore like to stay with Jagdish’s family, instead of going to Malaysia. Can Jagdish refuse an offer like this ? Certainly not ! He agrees. Jagdish manages to send his wife away and convinces his parents and his son to support him. What follows is a hilarious chaos and a laugh riot.