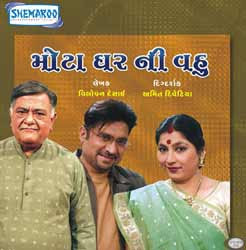 Parents raise their children even if they are five or more and stay with them, but the same cannot be said of the children. The daughters naturally go to their husband's houses, but more often than not, the sons, when they marry do not want to stay with their parents. And in the traditional Indian joint family, the blame for this is laid on the daughters in law. But all daughters in law are not alike. This play is about one such exception. A daughter in law who instead of widening the differences between the father and the son, builds a bridge of affection between the father and son and keeps the family united as one.