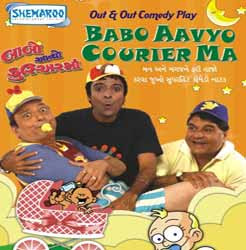 Summary: This play unveils a series of events filled with comedy, confusion, suspense and fun at the expense of the roller coaster lives of the three Jobhanputra men. Rasiklal Jobhanputra, the head of the family is the type of man who loves to enjoy life and believes in experiencing all the fun-filled and exciting moments life has to offer. He has two sons; the elder one named Prem and the younger Bunty. Prem Jobhanputra is a television serial director and Bunty Jobhanputra is a call centre executive. Both sons, like their father enjoy life to the fullest, irrespective of their commitments to their family. The three Jobhanputra men take family responsibility lightly and hence are not very popular with the ladies in their lives.

Rasiklal's wife has gone to her maternal home as her mother is not well. Prem's wife, after having given up on her husband due to his Casanova behavior has left him. She had little hope of her husband growing up? and acting like a responsible man. Bunty is the non-committed one. He changes his girlfriends as often as he changes his clothes. One day marks a turning point in their lives. A parcel arrives at their home and it is signed for by Bunty. When they open the parcel they're shocked to see a 2-month old baby in it. Along with the parcel is a note.

They read the note with astonishment and amazement. The author of the note claims that the father of the baby is one of the Jobhanputra men and the baby is a result of an illegitimate relationship one of them had sometime ago. None of them is willing to own up and take responsibility for his act. What follows is a concoction of comedy and confusion.