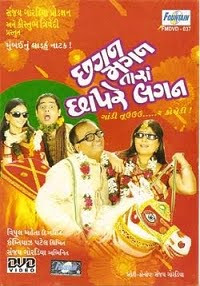 The rhythm found in the title of this play extends to the very form in which this play is enacted. Call it a Gujarati musical that claims to have attempted to move away from the standard format of blackouts after scenes. Here it seems ten to eleven scenes merge seamlessly with each other as the actors continue to remain on the stage. Sanjay Garodia who plays the lead at least thinks so. He says our matrimonial ads and fairness creams are proof enough of our vain desires.

Known for his comic roles, Garodia thus plays the ugly young man with a heart of gold. He is in love with a blind girl but is not bold enough to describe his appearance to her. When our blind and fair maiden is restored her eyesight, she has in front of her a handsome man. 'Time to go', says our bespectacled dark-skinned hero who looks as if he in obvious need of a dental treatment. He thus makes a graceful exit only to be pleasantly surprised later.