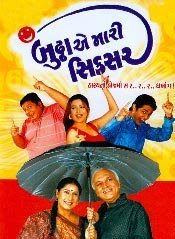 Sitanshu Rai lives with his eldest son Pushpak and younger son Pratham. Mr. Tanna who is a builder and owner of Tanna Builders, has as a daughter named Tulsi. Pratham falls in love with Tulsi, but her father does not approve of their marriage as Pratham belongs to a middle class family and they decide to run and get married. It's been four months for their marriage, but Tulsi has not been able to adjust in the family. Sitanshu Rai has a daughter Parijat, who is married to Manhar, but she does not want to stay with his mother as there is always a quarrel that takes place between them and decides to come back to her father's house.

Deviben is a cook who was called by Tulsi, to help them in the daily household chores as well. Even after all the bitterness between the families, Tulsi's father comes to meet her and Pratham, where he invites them for his younger daughter's engagement. Engagement was not the only reason for Mr. Tanna to come and invite his daughter and son-in-law, but he had an eye on Sitanshu Rai's property. He creates a havoc among the father and his family, as he tells them that their house was worth rupees 200 crores, and the greed in the minds of the other family members force's Sitanshu Rai to commit suicide. Sitanshu wants to make his children realize their mistake, but will he be able to do that? There is a suspense behind Deviben and Sitanshu's relation as well. Will the kids sell away the bungalow? Will they be able to discover the suspense between their father and Deviben? Watch this play 'Buddha Ae Mari Sixer' to know what happens further.